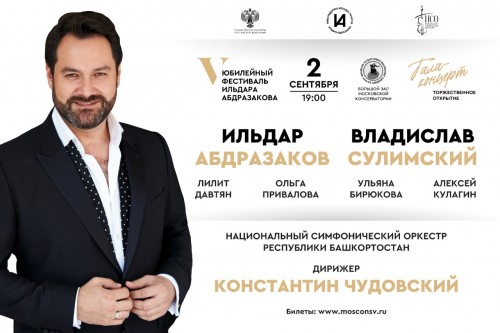 On , at 19:00, the anniversary V Ildar Abdrazakov International Music Festival #AbdrazakovFest will be opened in the Great Hall of the Moscow Conservatory. Ildar Abdrazakov brought together opera stars and bright young vocalists for the gala concert. Together with the artistic director of the festival, Vladislav Sulimsky (baritone), Lilit Davtyan (soprano), Olga Privalova (soprano), Uliana Biryukova (mezzo-soprano) and Alexei Kulagin (bass) will take the stage this evening. Paying tribute to his native Ufa, where the Festival was founded, Ildar Abdrazakov invited its musical symbol, the National Symphony Orchestra of the Republic of Bashkortostan. Arias and duets from popular operas, romances by Russian and foreign composers will be performed at the gala-evening accompanied by that ensemble under the button of Konstantin Chudovsky.

The further route of the V Festival includes 6 more Russian cities. The anniversary season's geography will be a record for this project – it will pass through the whole country. After the grand opening on September 2 in Moscow, the Festival visits Vladivostok, Surgut, Khanty-Mansiysk, Krasnoyarsk and Norilsk for the first time, after which it ends in the homeland of Ildar Abdrazakov - in Ufa - with a concert performance of Boris Godunov by Modest Mussorgsky.

In addition to the bright concerts, the key part of #AbdrazakovFest is its educational program. The anniversary festival will bring master classes for young vocalists to three major regional centers: Vladivostok (September 9), Khanty-Mansiysk (September 14) and Krasnoyarsk (September 17). During the master classes, the opera singers will be able to work with renowned artists and coaches. According to the results of the auditions, the most talented soloists can be invited to participate in the gala concerts of the festival, as well as in other projects of Ildar Abdrazakov.